Heterogeneous information networks require a unified agent processing platform, which can be deployed on a wide variety of host platforms, ranging from embedded devices, mobile devices, to desktop and server computers. E.g., in a seismic network some measuring stations are attached to buoy or installed on small islands, equipped only with low-power low-resource computers.

To enable seamless integration of mobile MAS in Web and Cloud environments, agents are implemented in JavaScript (JS), executed by the JS Agent Machine (JAM), implemented entirely in JS, too.

JAM can be executed on any JavaScript engine, including browser engines (Mozilla's SpiderMonkey), or from command line interface (CLI) using node.js (based on V8) or jxcore (V8 or SpiderMonkey), or a low-resource engine JVM. 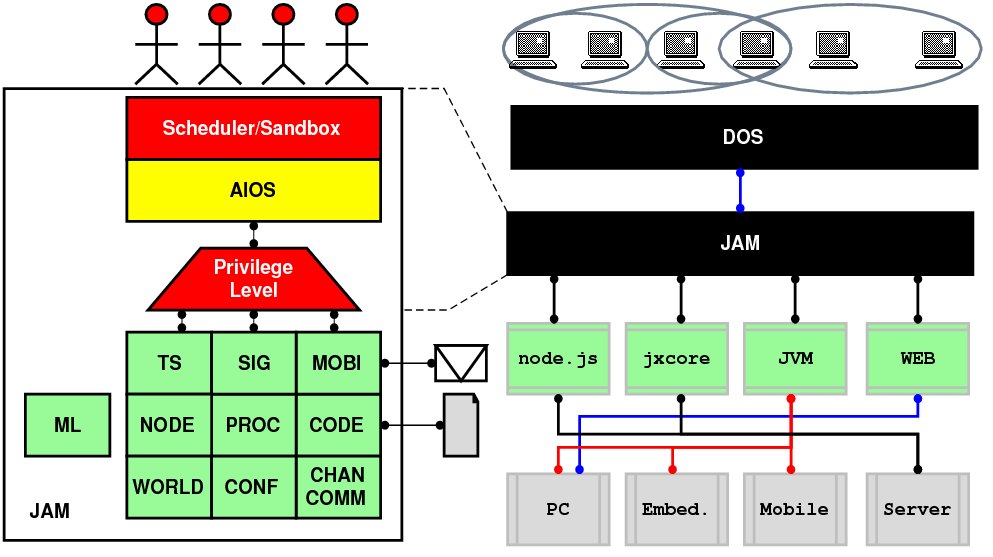 The CLI extend the JS core engine with an event-based (asynchronous using callback functions) IO system, providing access of the local file system and providing Internet access. But these JS engines have high resource requirements (memory), preventing the deployment of JAM on low-power and low-resources embedded devices. For this reason, JVM was designed. This engine is based on jerryscript and iot.js from Samsung, discussed in Gavrin (2015). JVM is a Bytecode engine that compiles JS directly to Bytecode from a parsed AST. This Bytecode can be stored in a file and loaded at run-time. JVM is well suited for embedded and mobile systems, e.g., the Raspberry PI Zero equipped with an ARM processor. JVM has approximately 10 times lower memory requirement and start-up time compared with nodes.js. JAM consists of a set of modules, with the AIOS module as the central agent API and execution level.

JAM is capable of handling thousands of agents per node, supporting virtualization and resource management. Depending on the used JS VM, agent processes can be executed with nearly native code speed. JAM provides Machine Learning as a service that can be used by agents with portable models that can be carried by agents.

The agent behaviour is modelled according to an Activity-Transition Graph (ATG) model. The behaviour is composed of different activities representing sub-goals of the agent, and activities perform perception, computation, and inter-action with the environment (other agents) by using tuple spaces and signals. Using tuple spaces is a common approach for agent communication, as proposed by Chunlina (2002), much simpler than Bordini (2006) proposed with AgentSpeak. The transition to another activity depends on internal agent data (body variables). The ATG is entirely programmed in JavaScript (AgentJS, see Bosse (2016B) for details).

JAM agents are mobile, i.e., a snapshot of an agent process containing the entire data an control state including the behaviour program, can migrate to another JAM platform. JAM provides a broad variety of connectivity, available on a broad range of host platforms. JAM can be used as a simulation platform integrated in the SeJAM simulator. JAM is capable to execute thousands of agents. The SeJAM simulator is built on top of a JAM node adding simulation control and visualization, and can be included in a real-world closed-loop simulation with real devices.

In real-world application security is an important key feature of a distributed agent platform. The execution of agents and the access of resources must be controlled to limit Denial-of-Service attacks, agent masquerading, spying, or other abuse, agents have different access levels (roles).

There are four levels:

The lowest level (0) does not allow agent replication, migration, or the creation of new agents. The JAM platform decides the security level for new received agents. An agent cannot create agents with a higher security level than its own. The highest level (3) has an extended AIOS with host platform device access capabilities. Agents can negotiate resources (e.g., CPU time) and a level raise secured with a capability-key that defines the allowed upgrades. The system level can not be negotiated. The capability is node specific. A group of nodes can share a common key (identified by a server port). A capability consists of a server port, a rights field, and an encrypted protection field generated with a random port known by the server (node) only and the rights field.

Among the AIOS level, other constrain parameters can be negotiated using a valid capability with the appropriate rights: